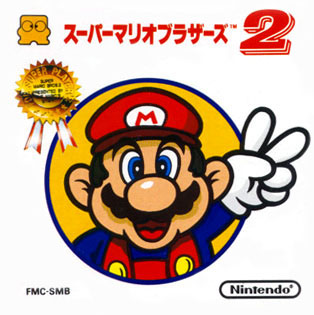 Lost Levels looks aesthetically similar to Super Mario Bros. but with a few visual upgrades (clouds having eyes, Piranha Plants, Koopas and Cheep Cheeps having different colors for example). While they are nice to differentiate it from its predecessor: it feels like stepping into an odd parallel universe, a quality that I quite enjoy.

Super Mario Bros. 2 allows the player to select between playing as Mario or Luigi at the start of the game. Luigi jumps higher, while Mario can stop quicker. This choice is crucial: jump higher but have every level feel as slippery as ice with Luigi, or have reliable stopping power but every jump be slightly more difficult with Mario? This is a really nice addition as it adds a lot of depth to the classic Super Mario Bros. and can drastically change how the player approaches every obstacle.

The level design is where things get wacky. In all of the Mario games I played, this is the strangest. Some levels are designed like traditional Mario levels while others feel like a fan-made hack or like Mario Maker levels. One level I can recall forces the player to repeat it unless they find the hidden vine that leads to the exit. Warp pipes do make a return, but some of them send the player to the beginning of the game! The joke warp room does give some mercy by presenting the choice to jump in the small pit next to it and lose a life instead. The levels as a whole have an outrageous design philosophy that will make one pull their hair out unless played with an emulator (with Nintendo Switch Online for example). Poison Mushrooms make their introduction here: they pretend to be Super Mushrooms while looking distinctly different, act the same as an enemy when touched and are everywhere. There are more Poison Mushrooms than there are Power-Ups in the whole game, almost punishing those curious enough to find out what is in the “?” blocks.

Super Mario Bros. The Lost Levels is a hilarious look into a very strange point of the Mario history. Playing the game traditionally is not recommended, as the levels design I feel, is too cruel to enjoy without emulator features (either with Nintendo Switch Online’s rewind feature or with save states) and can lead to frustration. If one can get over the torture Super Mario Bros.: The Lost Levels presents, there are some good laughs to be had for how eccentric the levels and the game are as a whole.

*This review was originally published on November 26th 2019 over on gametechsreviews.blogspot.com*

One thought on “Super Mario Bros.: The Lost Levels (Nintendo Switch Online) – An Official Mario Game That Feels Anything But.”